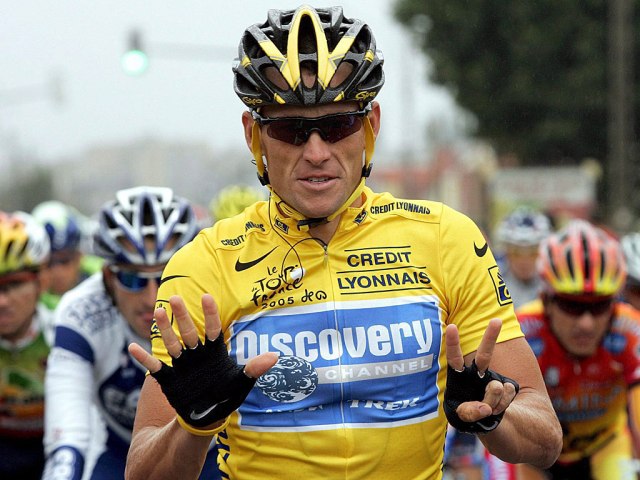 As everyone knows by now (or at least the people who pay any attention to sports) the last few weeks has brought big news in the world of PED’s. Two baseball players (including one leading the league in hitting) were suspended 50 games for getting caught with elevated testosterone, and more importantly, Lance Armstrong gave up his fight against accusations that he’d been doping during his 7 consecutive Tour de France titles.

For the most part I’m going to ignore the baseball players. It’s Armstrong that really makes me question both my opinion of the allegations around him and my stance on steroids as a whole.

First a quick overview. The USADA (I have no idea what it stands for…I think U.S. Anti-Drug Agency but I’m too lazy to Google it on the phone I have sitting right next to the iPad) supposedly has mountains of evidence, including testimony from a number of people who supposedly knew of Armstong’s history of doping and blood tests taken during several of his Tour de France runs that years after the fact turned up evidence that he had in fact been cheating.

Armstrong has no failed blood tests.

I’ll admit I’m torn on the subject. Professional cycling is a sport rife with cheating. If Armstrong is stripped of his titles, every single one of his titles will go to someone who has been involved in doping allegations off their own. It’s understandable – the Tour de France may well be the most grueling competition on the planet, with cyclists pedaling through the mountains over 100 miles every day.

I think the longest I’ve ever biked in one run is 8 miles. So, you know, I totally understand what they’re going through.

But I find it hard to believe that in a sport where everyone had been cheating, one man, who’d been given a 10% chance to live after cancer had ravaged him, had somehow managed to beat all of them 7 straight years all while clean. It defies logic and common sense.

And yet not one failed drug test.

I’ll be honest and say that if my life depended on it and I were to have to guess whether or not he was doping, I’d say he was clean. But either way, I do know one thing.

Years ago, there was a Simpsons episode where the town was celebrating Springfield’s founder. Lisa discovered that the guy had been a pirate and not worthy of the town’s love. When she went to tell Springfield the truth, she saw how happy the people were and how much they loved this guy, and decided to keep the truth to herself.

That’s kind of how I feel about Armstrong. He was a national hero, not so much because of winning the Tour de France (even for doing it 7 times), but because he came back from near death to do so. He was an inspiration to millions of people and he’s raised a shit ton of money for the cause. And then long after he’d been gone from cycling, someone finally had enough evidence that he hadn’t done it clean and they decided they needed to tell the world. Except instead of going the Lisa Simpson route and letting people cling to their idol, that person chose to tell the world.

Perfectly within their right, but the fact that donations to Armstrong’s charity exploded after he gave up the fight tells me that I’m not the only one who doesn’t care.

The issue of performance enhancing drugs really exploded onto the scene in the early ’90s when Lyle Alzado claimed that the brain tumor that ultimately killed him was caused by steroids. Ignore the fact that pretty much all the evidence said that that wasn’t truth. It was publicly accepted and therefore steroids became a major scourge in the sporting scene.

If only people had been studying the effects of blows to the head in football games for the past 20 years instead of acting like steroids were the absolute worse thing to happen to sports since the White Sox threw the World Series.

It should be noted here that I’m aware that steroids do cause health issues. I’m not arguing that. I also think there performance enhancers that no one has been able to show have negative health effects (HGH, for example), and steroids are only illegal when not prescribed by a physician (i.e., working to help you).

What I can’t understand is where the line gets drawn. No one has an issue with athletes using eyeglasses, or Lasik surgery. Mickey Mantle supposedly played his entire career on a torn ACL because the technology wasn’t there to fix the issue. Today a torn ACL means a year off and you come back better than ever. Tommy John won 290 games in MLB, but the only reason people know his name is because he was the first pitcher to have his career saved by having his elbow rebuilt. That happened in the ’70s. How many pitchers’ careers ended in the hundred years baseball existed because their arms gave out and there was no way to fix them.

So my question is, what’s the difference?

Then of course we had the great home run chase of 1998, which the owners loved, when everyone ignored the fact that balls were flying out of the park at prodigious rates and the people hitting the balls could play linebacker for the Bears. But hoo boy, that black asshole out in San Francisco breaks the home run record again 3 years later? Can’t have that.

(I’ll be fair and say it wasn’t really the fact that Barry Bonds was black, but rather that he was an asshole that ultimately led to people caring that he juiced while they ignored the evidence against Mark McGwire and Sammy Sosa.)

Now you’ve got players with elevated levels of testosterone and there’s still no acceptable test for HGH, so I’m sure there’s not a single professional athlete using that (insert massive eye roll here). Especially not the football players who go out and put themselves into the physical equivalent of a car crash every week for 4 months.

The thing is, as far as I know (I say that to acknowledge that I may be wrong but I’m not willing to research), steroids and other PED’s do not directly build muscle. What they do is allow people to recover from injury quicker and go back to building those muscles through hard work. In other words, you can take HGH all you want, but unless you’re hitting the gym you’re not going to get any bigger. In terms of immediate impact, laser eye surgery offers a greater benefit than any steroids. One day you can’t see, the next day you can.

I know my opinion isn’t popular, that to a lot of people Armstrong is nothing more than a cheat, no matter how much good he’s done. I guess I just look at things a little differently. The USADA is a government agency. The Justice Department investigated Armstrong enough to determine that they didn’t have enough to charge him with a crime. The USADA didn’t have the burden of proving beyond a reasonable doubt that Armstrong was guilty, so they could continue investigating until they had enough to bring their own charges.

How much did it all cost?

How much did the investigations and trials of Barry Bonds and Roger Clemens cost the federal government? Or the sham hearings where baseball superstars stood before Congress and made themselves into national punchlines? Good thing we’ve got money to spare. That’s kind of the equivalent of me filing for bankruptcy but going out and buying an HDTV for my third bedroom. Really? That’s how you want to spend your money?

I guess my point is, what difference does it make? Do we really care that a guy cheated to win races in a sport where everyone cheats? Or that baseball players took steroids so instead of making $5 million a year they could make $10 million? Or that the home run records are supposedly tainted (I’ll admit that they may well be, but no more so than Babe Ruth’s was because he didn’t play against black players)?

I guess for all I’ve written here, what’s strange to me is, considering how much I’ve written on this and how big the Lance Armstrong news was, is just how little I care at all.